Dubrovnik may not be on everyone’s travel list, but it should be.

Croatia is a beautiful country on the Amalfi coast of the Adriatic Sea, with red roof tops, warm weather, beaches, and sapphire waters. Europeans have long known of Croatia as a vacation destination, but it’s taken longer for Americans to discover its charm. 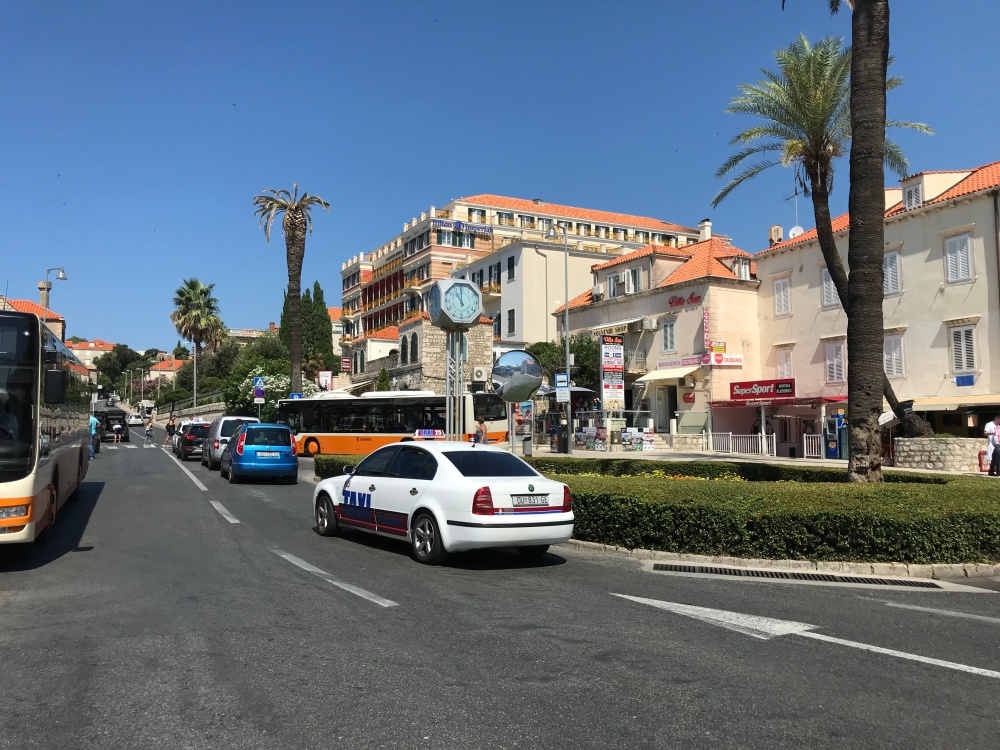 Sadly, I didn’t get to enjoy the pristine sands or waters on my recent trip to Dubrovnik, but I was able to explore Old Town, which is nothing like any other city you have seen before. Dubrovnik has gained recent recognition after being featured in quite a few television shows and blockbusters. *cough* King’s Landing in Game of Thrones. *cough* Star Wars: The Last Jedi.

(If you haven’t seen an episode of HBO’s hit series Game of Thrones, what are you doing reading this article? Go home and watch it ASAP!)

Even if you have never seen either of those pop culture hits (what’s wrong with you?), Old Town is a great place to explore. It may not have as many amenities as Dubrovnik proper, but it’s still great to walk around. 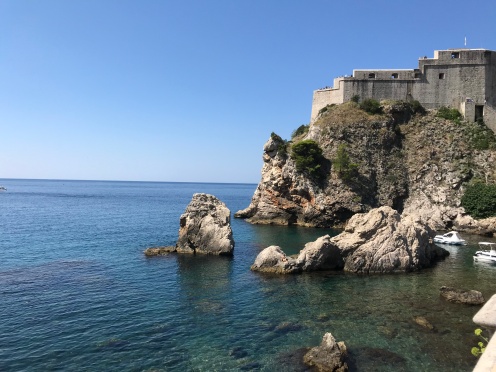 In my day trip to this beautiful city with Louise, we took a bus to Old Town from the cruise port, and walked uphill to the city’s cable car (later in the day as we past a tourist info booth, I saw no less than five people asking about this tour, but the cable car entrance is the only place you can get a ticket. They don’t sell them anywhere in Old Town). We were lucky enough to be the first people in line right as the cable car opened, so we took the four minute ride up to the top of the mountain overlooking the city.

The view speaks for itself.

Behind the mountain are the peaks of Montenegro and Bosnia, which were covered in clouds despite the beautiful weather. The cable car is also the fastest way to the old fort of Dubrovnik, unless you feel like taking a steep hike for close to three hours uphill. There is also a café at the top of the cable car (you can see the flag in my panoramic shot, the café is below it), but we didn’t have time to have a bite before descending.

After a short walk downhill from the base of the cable car, we arrived at the entrance to Old Town, which is a small gate through the towering walls. Statues of Saint Blaise, the protector of Dubrovnik, sit above all the entrances and exits. These statues also pop up along the walls inside the city. 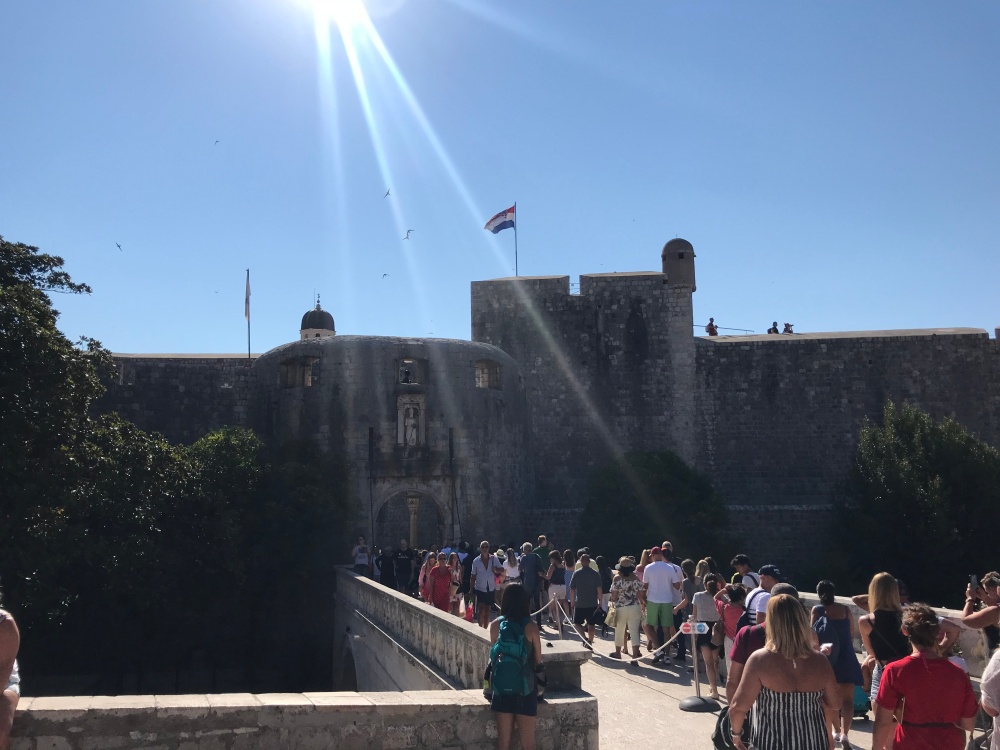 Each entrance is a bridge spanning over what used to be a moat around the city. However the waters have receded somewhat in the past fifty years, so below the bridge is a small public park. As we walked over the bridge through the entrance, we headed down a staircase/ramp to one of the main courtyards with La Onofrio’s Fountain in the center. There is a staircase up the walls, if you care to see where the Battle of Blackgate was shot (GoT). We didn’t have a lot of time in Old Town, so I wasn’t able to scale the walls (we were also short on Euros as this was the last port in our trip and there is a fee to enter the walls).

Our tour guide led us through some side streets to the port and main square, where the Church of Saint Blaise is located. Instead of hanging signs for the shops on the street, they had decorated small lamps with the names of the shops and bars. Something I had never seen before. You can still see scorch marks on some buildings from the Yugoslavian Civil War of the early 1990’s.

(One good tip for wandering Old Town: If you get thirsty, don’t buy water bottles. Bring a reusable water bottle and fill it up in any of the drinking or water fountains scattered across Old Town. Dubrovnik has incredibly clean drinking water, and it will save you a few Euro in the process. The water is as clean as New York’s tap, and that’s saying something). 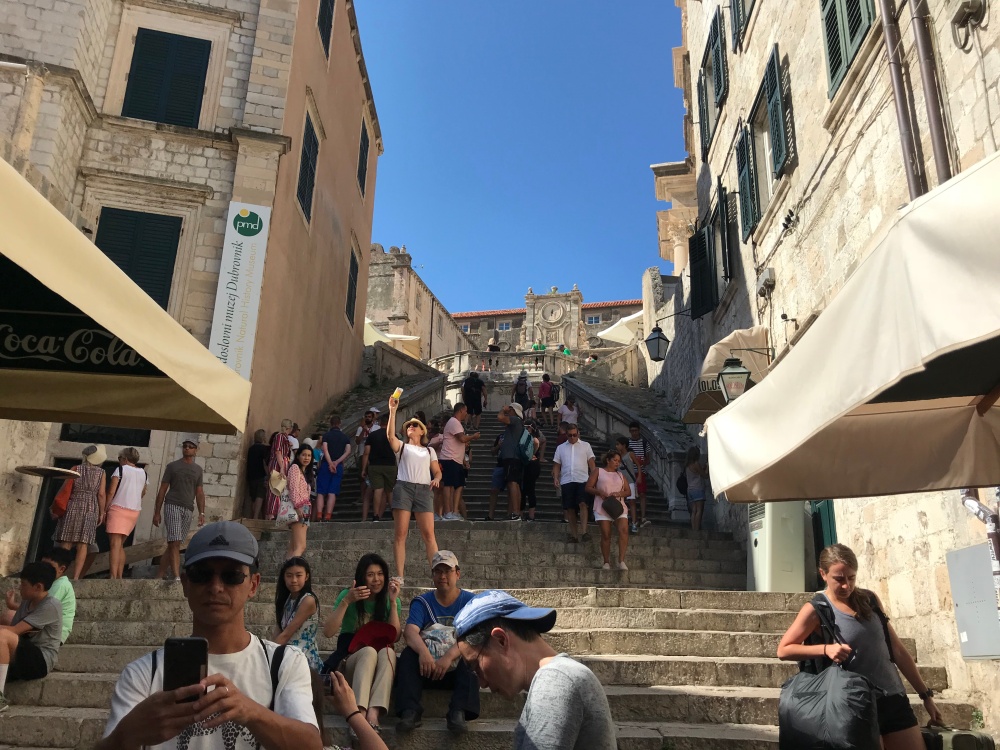 Being a Game of Thrones fanatic, I couldn’t pass up the opportunity to see the Walk of Shame steps. These steps lead down to an alley and to one of the main squares in Old Town that has a daily farmer’s market. I was surprised how busy the area was after seeing it cleared out in Season 5 of Game of Thrones. But we found a few lovely shops nearby, and picked up some cute artwork and jewelry before heading back. 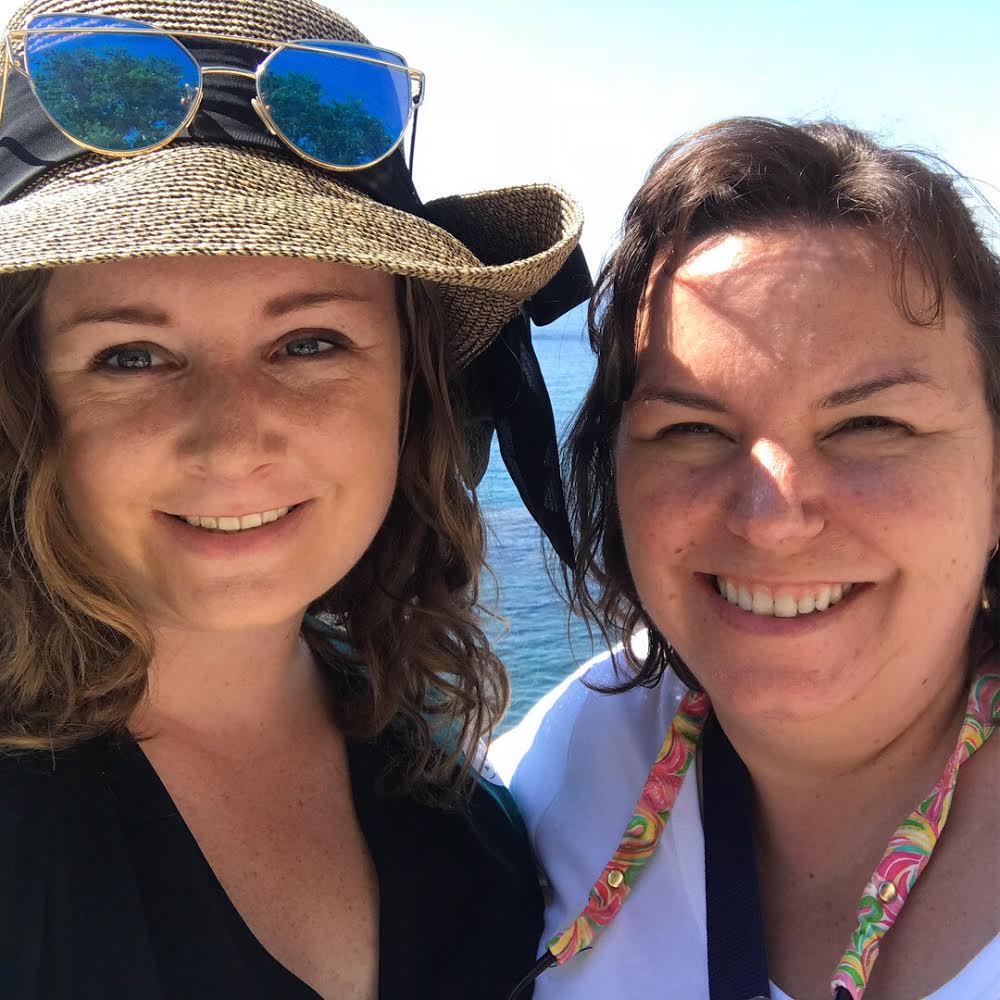 (Ignore my tired eyes, we got off the ship at 7am).

We took a bus back to the cruise port, and had an amazing view of the rest of Dubrovnik as we sailed away on the Norwegian Star at 12pm. I do wish we had more time in this gorgeous city, but I’ll make a trip back someday.